2/10/2021
Camille Summers
I couldn’t believe that 56.2% of students would still date the person if their parents openly hated them.

A yearly tradition for the OnLion Newspaper is sending out a Valentine’s Day survey to the Upper School student body. This year we received 146 responses. From senior crushes to deal-breakers to love languages and more, the Lovett student body has shared their romantic opinions and preferences (and even written some love letters to their crushes).
So...survey says…


Deal-breakers are always a top feature of the OnLion survey. We create new questions that are relevant to the current environment, but also a few fun ones. About 60% of students consider “not wearing a mask in public” a deal-breaker. I guess not being able to kiss in quarantine really had the students thinking about their significant other’s mask choices. 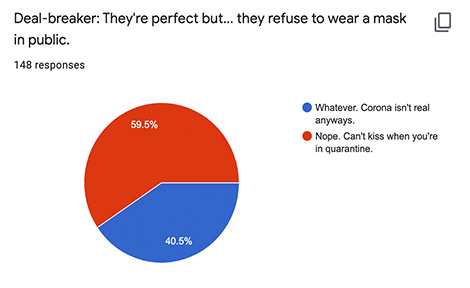 Another deal-breaker that was relevant to current news was “they’re perfect, but they support the other political party.” As I was happily surprised to see only 28.8% of students would consider their potential partner supporting opposite political parties a deal-breaker. In these polarized times, I thought it would be more, but apparently, people still have other things to talk about. 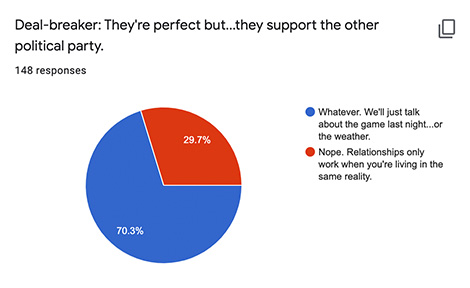 The last deal-breaker was more Valentines-Day/dating related: “They're perfect but...your parents hate them.” I couldn’t believe that 56.2% of students would still date the person if their parents openly hated them. I couldn’t even imagine those awkward rides home for you non-drivers when you know your parents don’t like your s.o.  And yet, it seems that 68.6% of students tend to be more attracted to those that are similar to them rather than different...so I don’t know how this whole parent thing would work. Hopefully, not too many of you have to deal with those awkward dinner conversations. 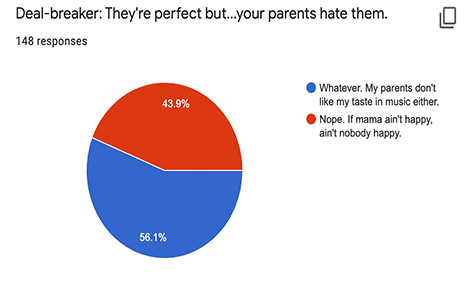 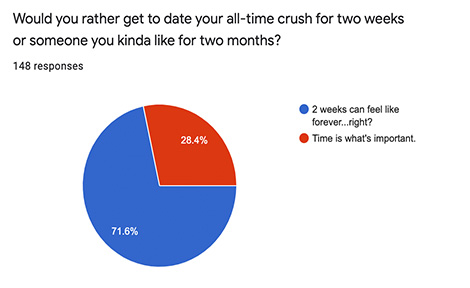 If you’re wondering how many Lovett students are romantically involved with someone, about 22.6% (33) of students are in a relationship right now while 58.9% of students correctly believe that 10-25% of students are dating. While the 22.6% is surprisingly on the higher side, now that I think of it, I guess a lot of people are so-called “cuffed” this season. 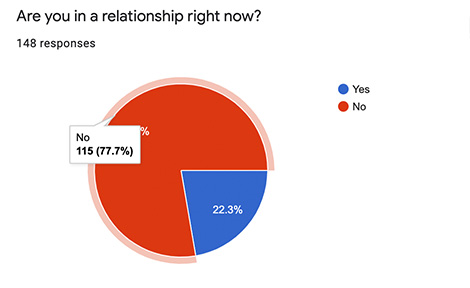 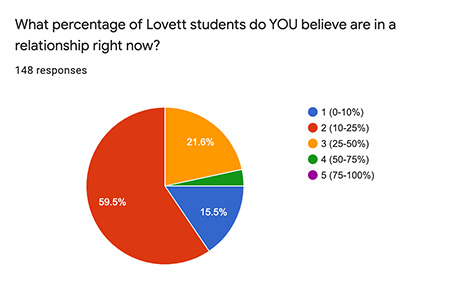 Love Language is also a big part of the Newspaper survey. According to The Five Love Languages by Gary Chapman, your “love language” is how you like to most express and/or receive love. 46.6% of students' favorite received love language is “physical touch” with 35.6% of students picking “quality time” as second. The remaining languages  are “acts of service,” “words of affirmation,” and “receiving gifts.” As for what love language students like to give, 38.1% like to give “quality time,” and 29.9% like to give “physical touch.” 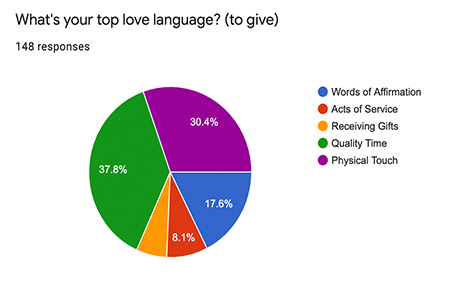 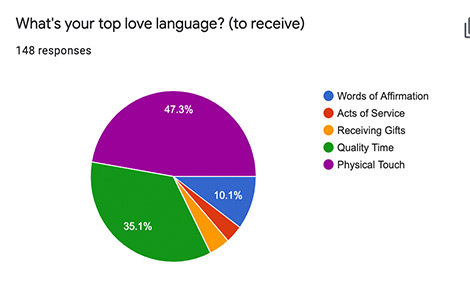 One of the favorite, less romantic categories of questions on the survey is Reality T.V. shows. The questions normally circle the Bachelor/Bachelorette series (even though only 26% of people watch it weekly and 41.8% have watched a few episodes). However, 55.5% of respondents would rather be on the Bachelor/Bachelorette rather than Jeopardy! How times have changed. Guess people would feel more comfortable dealing with the tension of the final rose than the Holy Roman emperors. RIP Alex Trebek.


As for their fantasy Bachelor Nation date, most people said they’d prefer going bungee jumping in Sweden (45.5%) than miming in Paris (8%). 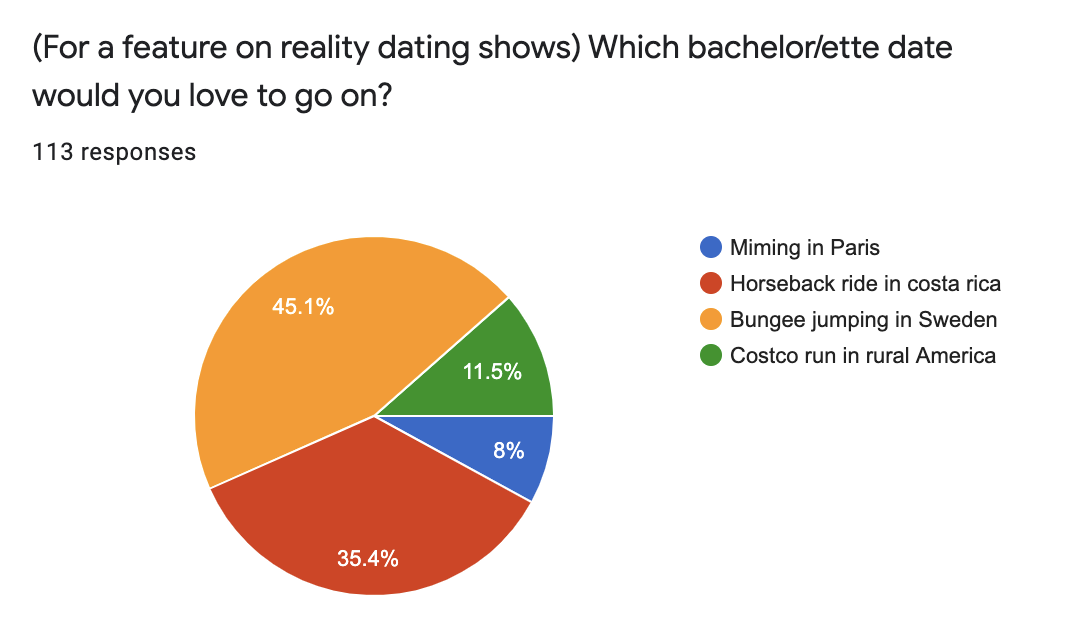 Transitioning from cringey, yet entertaining T.V., the survey asked students some open-response questions.


According to the survey, some of the most romantic books include The Fault in Our Stars, Me Before You, and Romeo and Juliet (a romantic learning lesson for checking your sources before believing them).


Some of the most romantic movies you enjoy include The Notebook, The Titanic, and La La Land.


And if you could star in a romantic teen movie, you knew exactly which song you’d want to be playing during the climactic prom scene. “Perfect” by Ed Sheeran took the top spot, and as you can imagine, there was quite the selection of Taylor Swift songs.


Part of the survey allows for students to respond with their own words rather than filling in a bubble. Two of the recurring questions include “Write a love letter to your crush” and “Worst date stories.” These are always fun to read, and though some may seem particularly true, they always get a good laugh.


Here are a few sweetly sincere ones:


“Dear crush, I just wanted to say that I've been in love with you for 4 months. You make me smile every time I see you. You brighten my day with your encouraging words, and I love hanging out with you. The thing that scares me the most is losing you if you don't feel the same way, but I feel we could be incredible together. I can't wait to see where our friendship goes from here on out. Love, Your best friend”


“Hello crush. Your smile makes me happy, and my heart jumps whenever you say hello to me in the halls. You are always so nice to me, and I would like to get to know you better, but I am just too shy to say anything.”


And here are a few more humorous ones…


“Dear Crush, please just give me a second of attention. I am down cataclysmically.”


But fear not. If you want any unqualified advice, check out our “Unqualified Advice” piece. Snapchat, music taste, being bold, and moving long-haired french guys downstairs.


As for some of our favorite worst date stories?


Here’s one that suggests the limits of compatibility:


“Well this guy and I went out to a movie and all of them were sold out except for Breakthrough (which is a seriously Christian-based movie). For context, I am very Christian. He was very atheist. Halfway through the movie, I started sobbing because something happy happened in the movie, and he started cracking up. Yeah, end of story. Lol we didn't date after that.”


Here’s one that will remind you to bring your wallet on a date:


“After the dinner, I went up to pay for the meal and did not have money. She ended up paying for the meal. At the end of the night, she also dapped me up. Weirdest moment of my life.”


And here are two that actually seem too romantic to fall under the “worst-date” heading:


“[We] ate chipotle in back of car during a storm.”


“We were taking a walk at the Chattahoochee and it was going great then on the mile and a half walkway back it started raining in sheets and we didn't pack an umbrella so all of our stuff got soaked and we were drenched but it's funny to look back on.”


So if you ever feel like your crush doesn’t understand your love language, there are too many deal-breakers, or he won’t add you back on Snapchat, just move on and be thankful that at least you didn’t “sit next to his grandma on the date.”


And there it is. The 2021 Valentine’s Day survey. By the way, if this isn’t your favorite day, you can check out Ayanna’s article on what to do on Valentine’s Day if you’re single. Among the responses y’all submitted: be with friends, eat chocolate, and talk to your crush.


Perhaps the least romantic (and most practical) response was to “study, because we all know teachers are gonna pile stuff up for Monday.” To this person, we can only say, cheer up, because we have Monday off for President’s Day, a holiday where one does not have to feel bad about being single.
Back