Exploring the Worth of Water 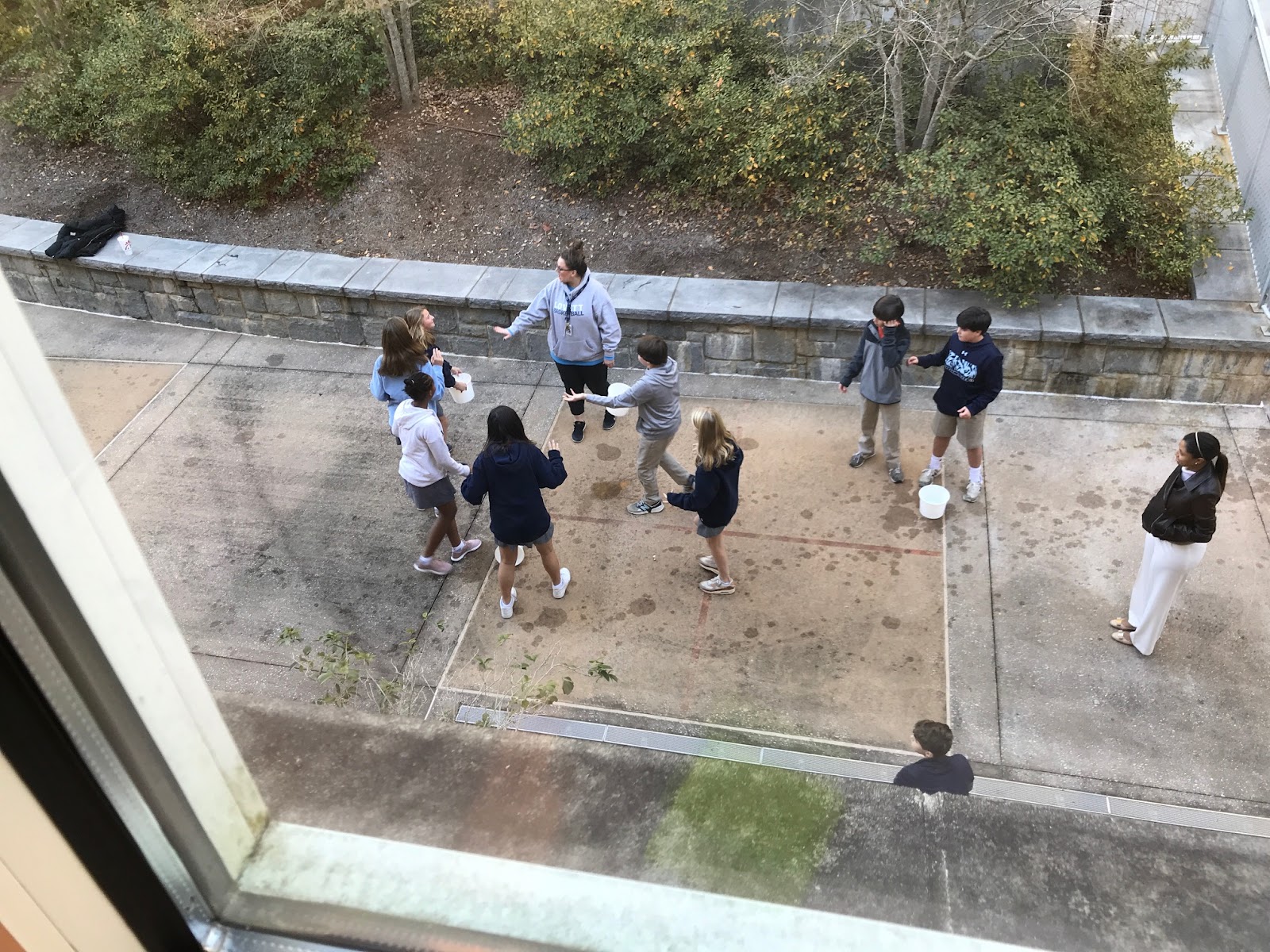 In her novel, A Long Walk to Water, Linda Sue Parks tells the true story of a young Sudanese boy, Salva Dut, who was separated from his family during the civil war in that nation.  Chapters describing his quest for survival are interspersed with the tale of a young Sudanese girl who is tasked with bringing water to her family each day (an eight hour walk).  The novel successfully draws attention to the water stress in the country caused by drought, contamination, political strife and lack of centralized regulation of resources.
After seventh graders completed the novel, teachers created a simulation that pushed them to experience water stress themselves.  Divided into family units, students claimed a plot of land and received a bucket and a cup. The bucket could not be moved and represented the allotment of the family’s water for the day.  “Families” were told there was a water source on campus, but that they needed to locate it and then begin the trek to retrieve water for the group.
As the simulation began, students realized that all their cups, the single receptacle used to collect water, were not all the same.  Some were paper, others were plastic, some had holes in them and others were old. The walk to the water source required a hike up a hill, and if students left their water source on their home plot of land unguarded, other families could take water, as could any animals that came along.  Cries of “It’s not fair!” could be heard across the campus.
In their class debrief, students unpacked their experience in conjunction with what they had explored in their novel study.  They noted:
“This stimulation helped me empathize with water scarcity victims because it gave me just a glimpse of exhaustion, pain, and hardships they have to go through every day, just to acquire a basic necessity of life. I think that the people who live in water scarcity do not have a very fair life at all. They should not be the ones who have to go get water in harsh conditions, risking their lives for something they should (obtain) easily. I think that this stimulation has shown me how I have such a wonderful life, and how I should be grateful for what I have.”
“The simulation helped me realize that what we did was not even close to what families have to go through in other parts of the world that are suffering from water scarcity. We shouldn’t be complaining that it wasn’t fair because the things that we played out, dying from lions, having water stolen, dying from contaminated water, and getting killed are things that people suffering from water scarcity actually have to face. We are lucky enough that we have water to use and we don’t have to wonder whether we are going to come home alive with enough water for their families for a little while. We should understand that this is real life and we shouldn’t be complaining about losing a game.”
Mrs. Lovett’s vision for learning was clear in this investigation.  Teachers “set the stage for lively, purposely activities,” and “instead of merely reading a textbook about the world outside,” students enacted their knowledge, bringing content to life!
Back