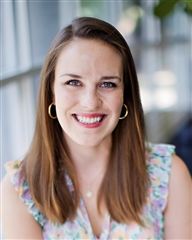 Associate Director of College Counseling
sarah.varner@lovett.org
Sarah Varner is the newest addition to the Lovett College Counseling team, recently arriving in Atlanta after several years in Berkeley, California. Originally from Asheville, North Carolina, Sarah attended the University of Georgia, where she earned her undergraduate degree in journalism. As a student at UGA, she served as an intern in the Office of Undergraduate Admissions, which prompted her to pursue a career in higher education. Shortly after graduation, she began a master’s program at Vanderbilt University, where she studied educational administration, enrollment management, and student affairs. In 2014, she joined Tulane University’s Office of Undergraduate Admission as an admission counselor and then moved to D.C. in 2017 to join George Washington University’s Office of Undergraduate Admission as an assistant director.
Eager to experience another aspect of the college student experience, she moved to the Bay Area in 2018 and served as an academic advisor for three years at the University of California at Berkeley. In this role, she guided students toward opportunities, including undergraduate research, study abroad programs, professional internships, and graduate school. While working at Cal, she also served for three years as an application reader for the Office of Undergraduate Admissions at New York University (NYU). Happy to finally be back in the South, Sarah will be a member of SACAC (Southern Association of College Admission Counselors), NACAC (National Association of College Admission Counselors), and ACCIS (Association of College Counselors in Independent Schools).
Back