The Meal
Pan-Seared Atlantic Salmon with Avocado and Cilantro Salad 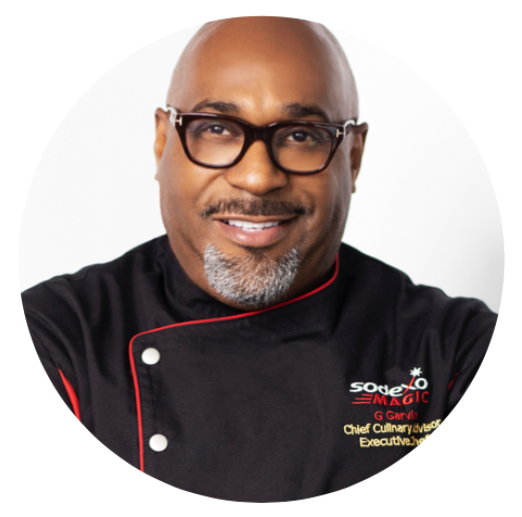 Restaurateur, Culinary and Hospitality Consulting Specialist, and Chief Culinary Advisor for SodexoMAGIC. Chef Garvin started his culinary career in his hometown, Atlanta Georgia at The Old Vinings Inn Restaurant at the age of 13 where he worked for the next three years before heading to Ritz Carlton-Downtown, as the youngest line cook in the gourmet dining room working with German Chef Vulker Shupp.

After spending some time in Los Angeles, Garvin returned to Atlanta to work with the Buckhead Life Group at Veni Vidi Vici and Pricci as sous Chef De Tournant.  He later returned to Los Angeles and partnered with Keyshawn Johnson to openReign Restaurant. After Reign was off to a great start, Garvin then started a successful catering and events company—The Cuisine Group and mastered large-scale events ranging from weddings, birthday parties, graduations, baby showers, and a host of private dining events. Chef Garvin opened his signature restaurant, G Garvin’s, where he continued to cater to and host high-profile dinners for such clients as Former President Bill Clinton to Halle Berry to the Former Prime Minister of Israel.

Chef Garvin continued to make a name for himself, as he was in the homes of millions for 7 seasons with Turn Up the Heat with G. Garvin. His increasing popularity earned this talented artist a second series on the same network entitled G. Garvin: The Road Tour. Eventually, Food Networks’ Cooking Channel contracted him to host the series, Road Trip with G Garvin. Which he taped three seasons.

Hosting Road Trip with G Garvin has earned him his first nomination for the James Beard Award for Outstanding Personality/Host and a second nomination for his restaurant design for Garvin's Restaurant. Garvin is now seen as a judge on Food Networks Guy’s Grocery Games, Guys Ranch Kitchen as well as Diners, Drive-Ins, and Dives as a special guest host alongside Guy Fieri. Garvin was also the host of The Underground BBQ Challenge for the Travel Channel.

Garvin is also an author, who has written "Turn Up the Heat,”Super Simple, Dining In, Co-wrote Skinny Cooks Can't Be Trusted, recently released A Message To My Children, and upcoming new release Everyday American Southern. Garvin offers a one-size-fits-all approach to cooking with sophistication and simplicity, proving that even the most basic cooking palate can create flavorful dishes.

Ever the entrepreneur, Garvin has opened LowCountry Restaurant in Atlanta’s Hartsfield-Jackson Airport in Concourse A. This from-scratch concept delivers a fusion of Southern cuisine and popular American favorites. His second restaurant, LowCountry Steak, takes a unique approach to the traditional steakhouse and bistro, offering premium steaks, quality seafood, and Southern-influenced dishes.

Through his company Garvin Food Group, G. Garvin has also created a consulting arm where he serves as Chief Culinary Advisor for SodexoMAGIC (a joint venture between Magic Johnson Enterprises and Sodexo). As Chief Culinary Advisor, G. Garvin designs, develops and delivers recipes, concepts, and training for the various accounts across all business sectors including health care, universities, corporate services, and worked with such partners as Kraft Foods, Tyson Foods and The Coca-Cola Company.

Garvin's impressive resume and philanthropic efforts have warranted such accolades as the Man of the Year award by Women Moving Forward in Business and Third Best TV Chef by Southwest Airlines Spirit Magazine (behind Jacques Pepin and Emeril Lagasse). Additionally, Garvin has been a popular guest on Good Morning America.

To further make an indelible mark on culinary history through his The G Garvin Culinary and Hospitality Foundation, Garvin has launched his culinary boot camp which is geared towards kids ages 16-19, who will experience not only the education side of the culinary field but also experience the hospitality, restaurant front of the house, management and operational skills as well as hands-on cooking experience. With this seven-day sleep-over camp Garvin expects to change lives and introduce kids to a new career choice, culinary arts.

Through Garvin's efforts, he hopes to aid in breaking down the diversity barriers within not only the cooking industry but in society as a whole where chefs of color are often categorized more often by race than a profession.